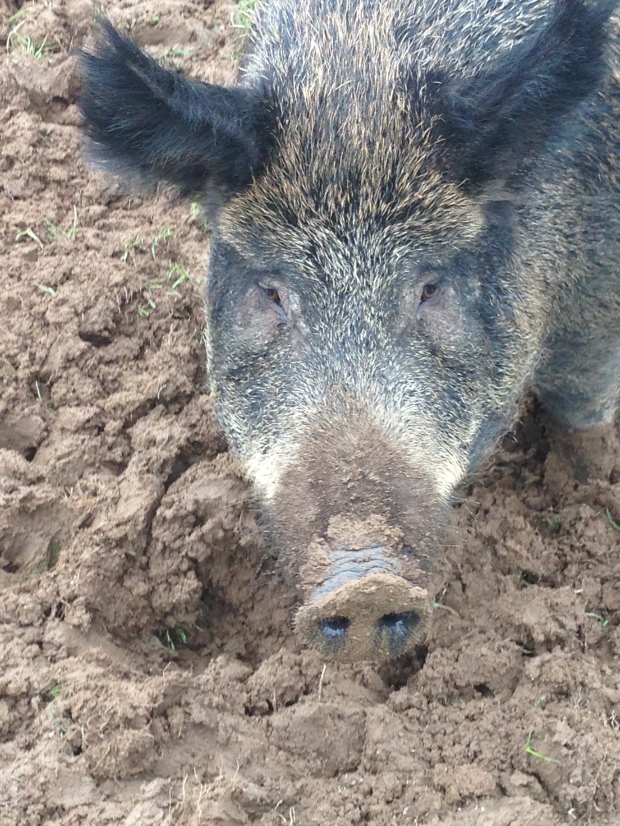 They are gruff , ugly and fierce. But they are sensitive to the changes in temperatures and the prolonged winter in a way that is lost to more regulated animals like milking cows. They have natural amounts of offspring, not forced to procreate several times a year to ‘maximise gain’. However they will naturally abort if they believe the weather may put the offspring at risk which has happened this year.

Us aspiring chefs from the School of Food fell for their cuteness while farm owner Pat Mulcahy explained to us the market for their meat. Later we sampled wild boar sausage sitting in the simulated Italian wine cave. It was hard to believe we were in Mitchelstown. The frescoes of Tuscan landscapes that adorned the walls transported us to a warmer time and place.

We were reminded of our dear, snorting truffling friends by the wild boar skins scattered here and there.

What a diverse country we live in. A surprise round every corner.

Did you ever cut open a brown scone, butter it and reach for the marmalade only to find the orange spread you ladle on is Apricot jam masquerading as marmalade?

The illogical anger as your taste buds struggle and yearn for the zest and buzz of marmalade is matched only by the disappointment that your breakfast on your breakaway has been partially spoiled. The anticipation of the perfect breakfast scone has been unfulfilled and you look around for someone to blame.

How could anyone think the bland smoothness of apricot would fool me? Who actually made the decision to substitute the real thing with an inadequate replacement. Better by far to say ‘We do not have marmalade’ than to lead one down or up the garden path and lull one into a false sense of consumable confiture.

It is actually not jam at all  or jelly as they call it in the US.  The real thing was sliced in a manual slicer attached vice like to the kitchen table  Seville oranges came in once a year and the annual ritual would rotate between the Rayburn where the slices would bob around in the preserving pan, pounds of sugar added until it was decanted into sterilised Jam jars  and oh the smell!

In times of need when the real thing was all eaten, mother would make it out of a tin .  Delicious !  Only when all else failed did we buy a pot of marmalade.

The sausages are eaten, the second cup of coffee is poured but its all gone up in a puff of smoke.

Is it worth talking to the waitress? Will this only serve to fuel the anger, underlining the unfortunate start to the day.

Or does one just bottle it up and buy ones one jar of the real stuff at the local shop.

Did you not know that ‘I was a morning grouch – until I discovered Little Chip marmalade ‘. One of the best pieces of advertising ever.

So remember- serving Apricot Jam can be responsible for morning grouches all over the world.