My last day in Italy was spent looking for a phone package, unsuccessfully as I could not unlock my Irish phone and having my hair done. I was taken in hand by the friendly managers of the Pinguino parking. At 4pm I made the 1km journey down to the ferry.

Welcome to chaos. Every guard there waved me on, until I was in the queue for embarkation, without having checked in. this is the thing about travelling alone. You have to leave the car where it is – tucked in under a stationery artic. The last guy who directed me in there did not realise I had not yet checked in. so I came back with my papers and got told off for being where I was. Not to worry, I reversed out when told to and we inched our way down the crowded quay. Stationery artics lined both sides of the quay. Into this, drove fully loaded Blue Dragons, – this is what we called double decker car transporters as children- and artics. They passed through the most unlikely spaces, not without lots of fist shaking and yelling. At one stage I saw a guard reading his phone while two massive trucks passed each other with inches to spare. I actually took confidence from this because I realised he knew this would all sort itself out. We inched onwards and I was eventually waved in while one truck was told to hold back and another revved its engines behind me. The passport men were completely relaxed and cheerful and only laughed when I confided in them that I was about to have a heart attack.

I thought I was home and dry at this point. Big mistake. I tried to board the first ferry in front of me as there were two with ramps open. I was told no – go down the quay and take a right. I thought that was come sort of a joke as there was only the end of the quay in front of me with a sheer drop into the water beyond that. Eventually I followed a campervan who was clearly having the same thought processes as me. In a blind act of faith, like finding platform 93/4 in Harry Potter, we made for the end of the pier. There it was – a blue sign saying turn right, we followed this along to where the Ventouris ferry for Corfu and Greece was loading.

The whole place was full of bustle and excitement. Azure sea tempting us across to Greece with promise of things to come. Foot passengers laden with children and suitcases walked up the ramp alongside the cars and trucks boarding. Then impossible as it looked, a Blue Dragon started reversing on to the ferry. 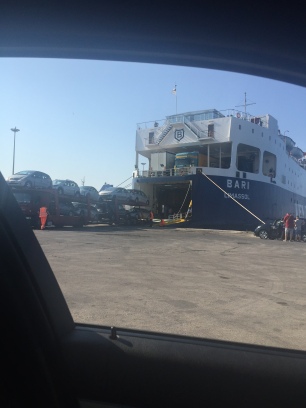 The main man from Vantouris, the ferry company, dressed in white shirt, sporting the right level of protruding stomach for his age and status, and holding a walkie talkie was the man with the power. He directed some cars to board, others to back back back and if they did not understand, he just leaned in and took the wheel. The guy was hands on.

I and several  campervans were put to one side. I only understood later that we had to go on last as the ferry was going on to Greece mainland after dropping us. So 7 pm, our departure time came and went. Eventually , I got the call up. I then realised that horror of horrors, I was being told to reverse in. just then, my ticket was checked and they noticed my car had not been included in the price. I was now the only vehicle not boarded and soon some flunky from the office drove up in a citroen and came to a halt right in front of me. Sunglasses were pushed up on his forehead as he gave me a look and he spoke on the phone. All I could think was- a good result here is that I reverse up the ramp. Its like waiting to know how you will be executed. Lucky me, they decided I could pay the balance in the Bursar’s office on board. So that left me to lock right and left – – a guard came up and said – look at him when he directs you,.’ I thought I should look where I was  going but I abandoned that and just moved the wheel whichever way I was told. In fact I was gone well beyond caring. I had confidence too that they knew what they were doing so I did not get anymore stressed than I already was.

It was great to get on the boat. The bursar was chain smoking in his little office and told me he could only accept cash. Luckily I had the extra €50 on me and he remarked what a beautiful name I had.

Now I never heard that one before so I assumed he was just out of practice. As I left, I forgot to take my passport so I was called back. They assured me it would have been safe there with them, what with such a lovely name etc.

All I was worried about was that I had enough for a beer so I could celebrate my trip to date and my successful boarding to my final destination.

I found a comfortable part of the seats in the bar where I could sleep and I installed myself. I went on deck to see the views of Bari behind us. How glorious to be leaving Bari and crossing the Adriatic Sea with warm breezes blowing, blue sea and the prospect of a beer ahead of me. 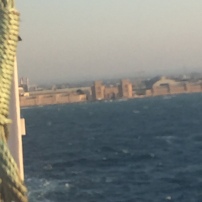 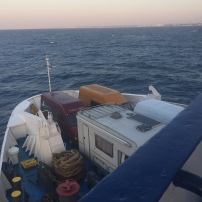 Sleeping has not been a problem for me on this trip. I have surprised myself over and over by dropping off to the sound of ship’s engines, youngsters having the crack and television playing. I hope I did not snore too loud as I really had a deep sleep. No blankets or pillows, just my bag for a pillow. Actually way nicer than being entombed in a cabin. I got up at 1.15 am and walked out on deck for a while. Need I describe the scene ? -balmy breezes, stars overhead. There was a man asleep on deck on a double airbed with his two dogs asleep there with him. There were also tents pitched on deck. I went back to my seat and fell back to sleep.

Next morning, the approach to Corfu was majestic and dignified. The scenery would not allow it to be otherwise. The old fortress of Corfu town loomed in to sight as the mountains paved our way on our right hand side. Disembarking was pure joy into the sunny Greek morning.

This site uses Akismet to reduce spam. Learn how your comment data is processed.